I mapped Østfold in two different ways. Mentally and physically. In Moss, I looked at the mental state of the post-industrialism there, and in Fredrikstad I had the physical experience of sleeping alone in a tent on a post-industrial site.

Since the workshop was research-based, I chose not to produce a physical artwork. Instead I produced mental ideas for future realization.

Moss is changing, and one of the questions in the process of change is what to do with the leftovers from the city’s industrial past. During the stay in Østfold, I interviewed some of the citizens of Moss about their city. What struck me was that some of the people whose parents had been workers in the factories had a very unsentimental view about the industrial remnants.

I compared this with my own artistic approach to the empty factory buildings and realized that in my aesthetic experience of the post-industrial sites, the notion of hard work had gone or had been abstracted to a level that made it possible to romanticize. The paradox was that I, coming from the outside, wanted the industrial past to be preserved, while those coming from the inside wanted to forget it.

To map a city is a complex task and is impossible to carry out in five days, but what I found interesting during this process was the plurality of voices that exists in a city. Different opinions that can add perspective to your view of the world. On the basis of this, I got an idea for a future project about mapping: Dream Factory #2 (Moss) asks the citizens in Moss to dare to dream about the city’s future. The dreams are projected onto Lantmännen’s grain silos, one of the factories still active in Moss. Through the large scale projections, a public dialogue will take place in the cityscape. In the same way that commercial billboards talk to us in public space and make us into consumers, the projected dreams will make the citizens of Moss into dreamers.

When I decided to sleep alone in a tent in the post-industrial area in Fredrikstad, I guess I knew that I wouldn’t be sleeping a lot that night – and I was right. The night in the tent turned into a dream, even though I was awake most of the time.

When looking at the pictures afterwards, the post-industrial area in Fredrikstad doesn’t seem very frightening, but from the inside of a tent in the dark, anything can happen on the outside. Deprived of your eyesight, but constantly in contact with the surroundings through your ears, the tent both becomes your protection and your prison. The world is hidden, but it sees you.

After my night in the tent, I became curious about whether one could use the tent as “audience seating” in a performance that was “shown” in the night at a post-industrial site. Somehow using the state between being awake and being asleep to create an aesthetic experience. Intrigued by the conversations in Moss, the project should resurrect factory labor and let it penetrate our sleep. The name of the conceptual idea is Dream Factory #3 (Fredrikstad).

Beside the two dream factories, I also examined the term “site-specificity” during the workshop in Moss. Fueled by the extensive information we got at the seminars in Østfold and Budapest I got interested in what site-specificity meant to the participants in the PICTURE project. To find out, I invited everyone to join me for a one-to-one interview in a small boat. The interviews will be shared on the blog (www.pictureproject.eu) later. 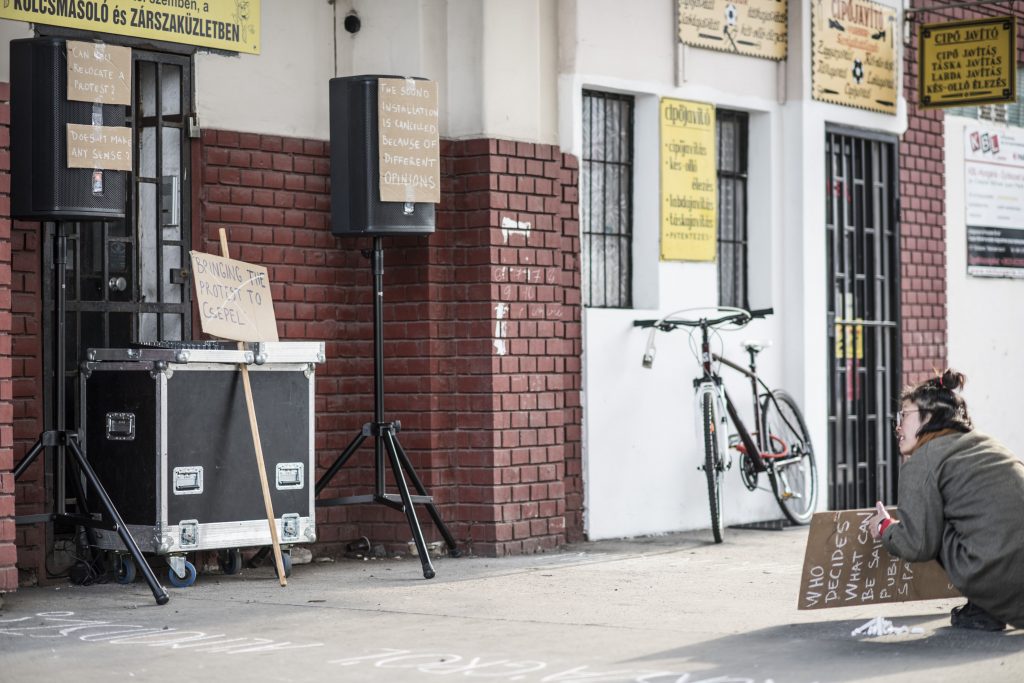 When I arrived in Budapest, a protest against the governing Fidesz party was schedule to take place a few hours after my arrival. Although I felt quite tired, I decided to join, since I understood that this protest was important for Hungary.

I spent most of my last stay in Budapest in Csepel. This time, I was occupying one of the busiest squares in the city. In the nighttime, the other occupiers and I succeeded in forcing passing cars to stop and take another route. Being a lot of bodies, we could do almost anything we wanted.

The next day, I went to Csepel to participate in the second workshop of PICTURE Budapest – Østfold. The aim was to create a small site-specific work in Csepel for the mini-festival.

At that moment, taking the tram out of Budapest, entering the gate of Csepel Művek and creating a piece of art seemed difficult to justify. Why leave the city center when the protest was on? Why enter Csepel Művek and invite people to join when a lot of the inhabitants wished the area would just be left alone? Why make art in Csepel Művek? Why make art instead of protesting? Could art create social change? Should it?

There were a lot of questions, and due to my inability to speak Hungarian, they proliferated even further. In Csepel, I did not understand anything and couldn’t communicate with the locals. All the time, I was experiencing everything from the distance of a foreigner, which was a difficult starting point for site-specific work.

While walking between the dilapidated factory buildings, the bad working conditions and the poor inhabitants I thought of the protests. In Csepel Művek there were no signs of protest, only of what the protests might change.

So I decided to make a sound installation that brought the protest to Csepel to explore if it was possible to relocate a protest and if it made sense to do it. The concept was simple. In the main gate to Csepel Művek, I played field recordings from the protests at a high volume. Auditorilly, it felt like being at a protest, but physically the crowd was missing.

During the first day of the festival, some local people came and confronted us with their displeasure. They didn’t like the criticism of Fidesz that was being played in the field recordings from the protest. To them, this wasn’t an art project, but a protest, and they wanted it to stop. After a certain point, I decided that it was best to do what they said. After an hour, the speakers were quiet, and the next evening the protest was canceled.

It was not possible to bring the protest to Csepel. Maybe if I had invited a crowd of Hungarian-speaking people to stand by the sound installation and engage in dialogues with the people that were upset over the protest. Would the protest have been possible then? Would it still have been a protest? 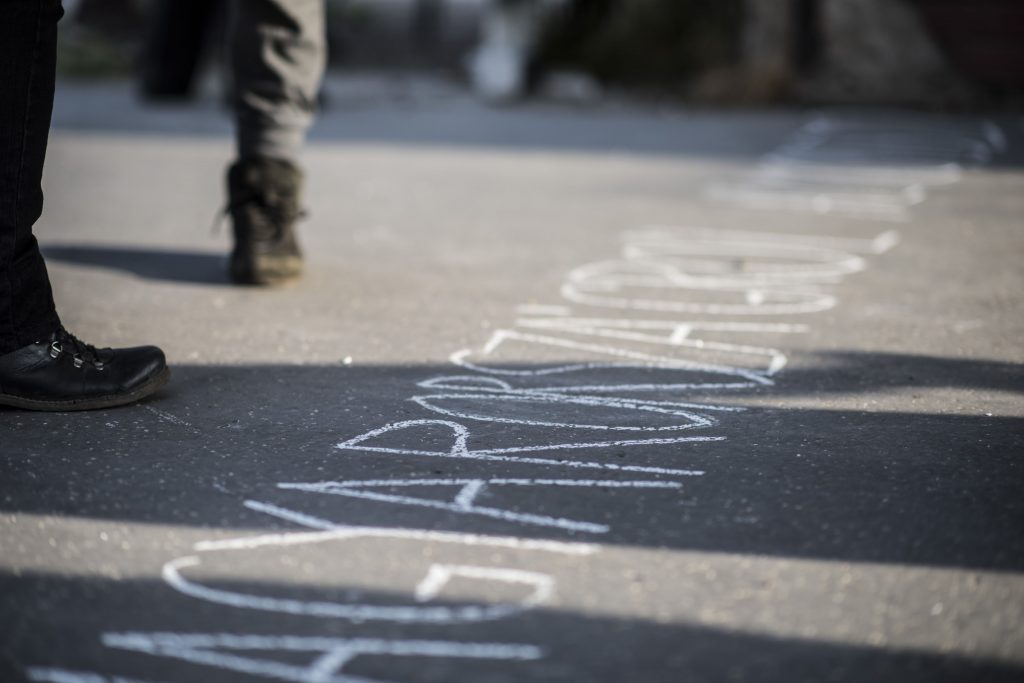