Urban spaces and parks – whether in New York or Budapest – have always been created as places for all social classes to be able to meet and interact, as Frederick Law Olmsted put it. Public spaces, like litmus paper, are indicators and the true mirrors of processes taking place in our societies. Just like in the West, economic changes, urban development and mobilization have created useless public spaces in Hungary too. To top this, in the socialist era, it was not really sanctioned to meet in public spaces, hence people still acted in a formal way in public spaces, even after the change in regime. Streets reflected the gray and gloomy atmosphere of society that dominated the cities.
This grayness still dominated the urban realm in 2000, when we – Újirány Landscape Architects – were commissioned to take part in the rehabilitation of the industrial site of the former Ganz factory to make it one of the first newly built public parks in Budapest after the ’90s as part of the Cultural Center of Millenáris Park. Concentrating on the social aspect of public spaces, we set up a concept which devoted everything to inspiring people to have a new view and understanding of their surroundings, which they could feel as their own, and use freely as a real homelike meeting place outside of their homes. The park’s concept was drawn up on the temporal process of creation where all park elements such as the unusual spatial organizing elements (grass benches and hill lines), the rural elements (wheat field and vineyard) taken out of their original context to be put in an urban one and the movable park elements aimed to inspire people to truly interact with their park (by even changing it, based on their needs) and the other people using it. 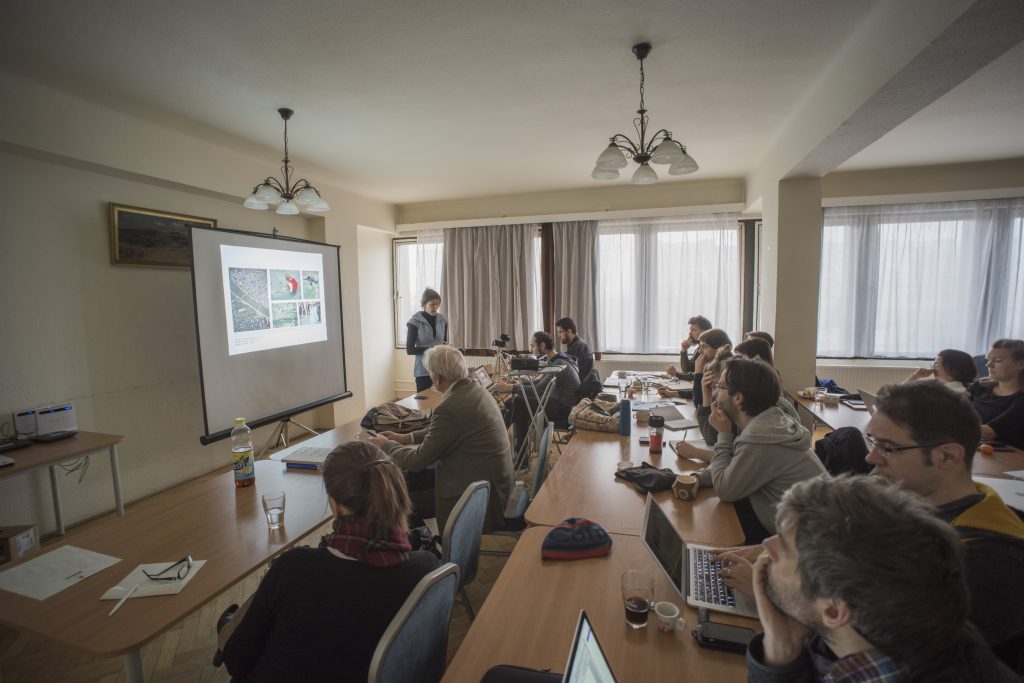 The idea of enhancing social interaction became the center of our attention, and turning to our everyday surroundings – the streets and squares of Budapest – the question was: could it work for people to feel these “useless” spaces as their own too? We started to create public interventions as reconstructed urban situations such as the “Pollmap” that allowed us create interactive arenas that would make people stop in the midst of their everyday rush and meet people with whom they would never interact with normally. Pollmap is a game where people can mark their favorite places on the map, along with their least favorite ones, and so on, which also helps their encounter with the city itself. It also gives an opportunity to meet and engage with others. It is also a playful form of polling opinion. It can be said that this is a constructed situation that helps in reconstructing urban spaces as inclusive places where social interaction takes place, modeling an alternative way of seeing and using public spaces where people can enjoy a positive urban way of life and living.
As we can see in the works of Raumlabor Berlin and Karo Architekten, since the turn of the century, there have emerged in the forefront such ideas where locals are involved by groups of architects/artists in activating unused/leftover spaces in order to revive them as community places. Learning and experiencing more and more the positive and strong effects of such public art interventions, we started to move on to develop a method that can be called a durational strategy for incorporating such playful, low-cost, temporal public art projects within the process of urban rehabilitation in order to help create places of meeting, places of discussion and places to learn about a place through fun.
The basic idea was to create a chain of interconnected temporal interventions in a specific site that would activate the actual city part for a long duration of time in order to develop time and space for meeting and doing research work to help local identity to arise and new common goals to develop throughout the process. By lengthening the design process, more emphasis could be put on gaining a better understanding of the place itself while involving residents in the process – to be able to reflect on the identity of the place properly. This durational method allows new thoughts and design ideas to arise through the artworks, which can be incorporated in the regeneration program/process that hence becomes a dynamic one that is capable of changing and adapting with time upon the needs of the people. This idea of intervening in a large-scale urban development can also be seen in Jean van Heeswijk’s work: The Blue House, where she sets up (as a curator) a community/residency house for culture and research, a meeting point for invited artists and locals to meet, to create projects that offer participants an ideal platform for studying, acting on, and co-designing the public spaces of Ijburg.
Around the same time as van Heeswijk’s project, here in Budapest, we tried to put the aforementioned theory in practice. During the period of 2008-2012, we managed to create a chain of public art interventions on the site of the Palotanegyed (“Palace Quarter”) in cooperation with Rév 8 Zrt. (the office in charge of the rehabilitation process) and the Association of Citizens for the Palace Quarter (CaPE). The playful projects – partly realized within the framework of the rehabilitation, partly as guerrilla acts – aimed to build bridges between the locals and the authorities by creating informal meeting places to enhance communication between fellow inhabitants in order to share local knowledge and to develop a stable network of citizens who take an active part in creating and sustaining their community and their environment.
The first projects that were realized attempted to help communicate the aims of the rehabilitation and to poll people’s opinions about the rehabilitation. The two-day temporary “rehabilitation office” created at Lumen Coffee House and the patterns that marked out the rehabilitation site acted as information centers, so people could learn, in the actual space, where the changes would be taking place. “Pollmap”, an interactive orthophoto game, was later developed and installed in a busy square of the Palace Quarter and was a playful way of gauging the opinions of the people regarding which parts of the neighborhood they liked most/least and which parts they would prefer to see rehabilitated.
Actions such as the “Wind-blown” quotations and the “Living Gallery Project” tried to reflect the cultural and historical background of the site. Quotations from the well-known Hungarian writer Gyula Krúdy that were contextually connected to Pest were painted randomly on the surface of the asphalt. This aimed to draw attention to the streets bearing the names of famous writers and poets. The project tried to imply that coffee houses, as reading rooms, and antique bookstores could be important elements in giving a unique identity to the area. The “Living Gallery Project” involved local shopkeepers in exploring and exposing their shops’ individual stories and myths, to be presented on small tablets next to each shop’s entrance. Reading the 21 brief narratives, the story of the street comes alive: how it evolved from an old “carpenters’ street” into an important cultural scene of the 1990s. 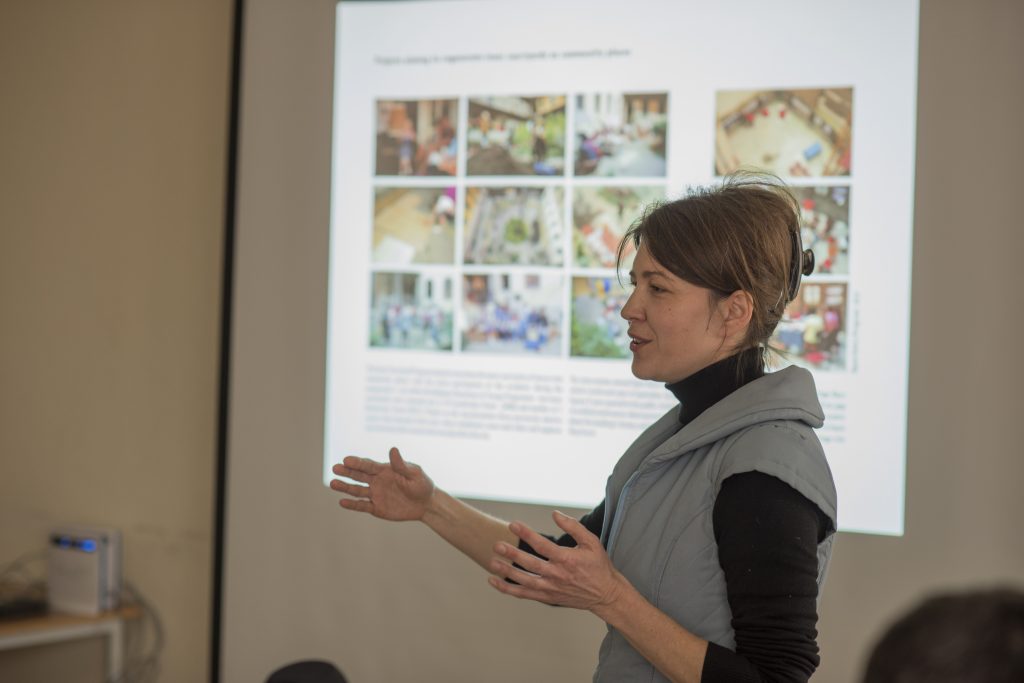 Within the projects aiming to regenerate inner courtyards as community places, two programs were realized. In the “Open Gates” program, two inner courtyards were temporarily opened to the public for a day when inhabitants organized an event in which presentations, exhibitions and discussions helped the visitors to learn about the building’s history, the people living in it, and their efforts to sustain the heritage site in which they live. The “Inner Courtyard Project” aimed to permanently transform inner courtyards of houses into community places with the active participation of the residents. During the program, two inner courtyards were renewed. In both cases, a central communal element was created where inhabitants could meet each other and organize events.
In order to activate streets and squares, “Urban Salon” and “Urban P.E.”, realized as part of the Placcc Festival, modeled alternative space usages for the duration of one week. “Urban Salon” created a place for contemplation, as sun chairs were placed on an empty square in the Palace Quarter to create a space in the city where one could spend time freely, without the compulsory need to spend money. As a counterpart, “Urban P.E.” allowed people to exercise for free in the streets of Palotanegyed with the help of exercise bars fixed to the facades of houses.
Our strong ambitions to involve locals in urban regeneration led us to the realization of the community-based reinvention of Teleki square. Teleki square is situated in one of the most disadvantaged neighborhoods of Budapest. Once a busy marketplace, it devolved into a barren ill-reputed crime-ridden and functionless space by the 1980s. The aim was to develop a community park and to help residents take part in the process. The design method was the same as the one we would have followed in our office. Hence, it can be said that the people taking part were truly design partners and could really take part in defining how they pictured their own future. We used a variety of tools to bring the residents into the picture: lectures and discussions/debates, as well as on-site activities like interactive mapping, temporary land art installations and photo exhibits. Collaboration between the people was good, and we usually had a lot of fun.
The concept of the park was drawn from the colorful history of the park. Reflecting also on the namesake of the park, we tried to use the idea of “inclusiveness” as a unifying thread, and hence the park acts as a ground where all park elements and activities serve to recreate the former openness, multiculturalism, tolerance and receptivity of the area. Teleki Square was re-imagined as a lively, therapeutic community park full of life and a venue for different activities. During the creation of the concept, we tried to design such elements that give rise to varied use by not being over-defined, so their meaning is constructed through their usage. Our aim was to encourage people to interact. Now Teleki Square is the green heart of Józsefváros once again. It is a meeting point and is open to everyone. It is a multi-functional recreational park, which also reflects former times not formally, but mentally.
Apart from reaching the goal of realizing a common ground for the design, Teleki Square Association was formed by local residents taking part in the design process to be able to continue to contribute to the square’s management and ongoing improvement. The program showed that the long-lasting poor state of the park had made people long for a change, for which they willingly joined in with the shared work. Now they take action for realizing their common dreams/goals together and take common responsibility for the park that they feel is their own in a certain way. They develop their own programs, such as the Garden Party that closed the design phase of the process, and the Christmas Party also held in the then still run-down Teleki Square.
The works attempt to set positive examples in showing that socially engaged public art interventions and community-based design are able to create arenas of meeting and discussion in public space that have an impact on reviving local communities through the reconstruction of communal/public spirit. They try to underpin the belief that (re-)constructed urban situations that encourage people to meet in public spaces can be of help in creating a more open, inclusive and cooperative society arise that takes active part in forming itQs environment and future. This way, landscape architecture can truly become “the manifestation of the collective cultural, historical and philosophical identity of a community” – as defined by John Hopkins – and city dwellers can again rediscover and meet in public spaces to give back their original function of being the “stage on which life’s drama is played out” – as put by Lewis Mumford.